Topps Chewing Gum, Inc started inserting trading cards into bubble gum packs in 1950, cards related to sports like baseball, football and TV characters. My granddaughter likes chewing gum and here, there is a gum called “TURBO” which comes with a wrapper insert of different types of car. 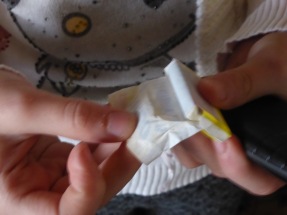 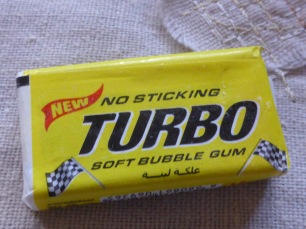 My research suggests “Turbo” was originally manufactured in Turkey (late eighties to 2007)  but more recently in Poland (from 2015). The quality of the insert is not great and sometimes they have been miss cut, so the car name and picture do not correspond… but I like collecting car related stuff. (I have an entire blog devoted to my collection and collecting of diecast model cars… My diecast blog (click here) )

This has been cut wrong, the picture is of a Volvo not a Lamborghini

Ana has one piece of gum on the way to school each day, if the car is something like a Jaguar or a Lotus, I get a little excited. Ana just enjoys the gum. 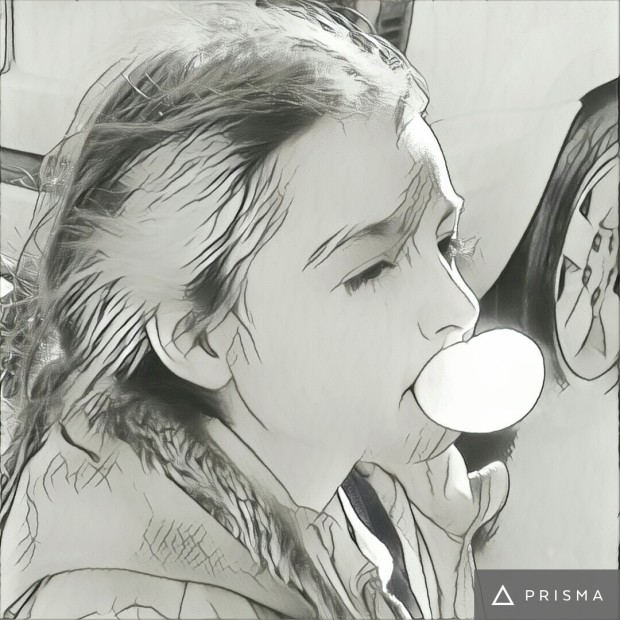 I have never studied psychology, so I don’t know how psychologically valid my reflections are.

I came to Tbilisi (Georgia) in 2009 with just two suitcases of my worldly possessions, in which I had just five diecast cars. Before moving I had sold or given away most of my possessions (including a couple of dozen diecast vehicles). Since arriving in Tbilisi my collection has grown considerably to around 500 vehicles with 15 to 20 being added each month.

The seeds of my current collection brought over from England in 2009.

I have had small diecast cars for as long as I can remember.  On my first birthday cake was a Matchbox racing car, so I’m told. Then there was a Matchbox Pickford’s Removal Van with sweets in the back, occasionally restocked by my mother.

The Express Delivery Van, I picked up recently has an opening rear hatch (unusual for recent Matchbox models to have any opening parts), which reminds me of that Pickford Removal Van. My earliest actual memory is being on a train holding a Matchbox Racing Car Transporter, I would have been three at the time. Collecting model cars…toy cars…is fine as a child but as an adult?

I don’t have any of the models I actually played with in my childhood. But I do have some of the same models picked up more recently at Car Boot Sales and markets.

The value of my collection is not monetary, but it is emotionally valuable—I’m not looking to profit from the sale of the cars. I usually take the cars out of their blister packs, which would reduce their value if I was looking to resell, but I want to hold the car to feel it in my hand and look at it from different angles. I do look for  bargains at boot sales also at Drybridge Market, I tend to know when something is way overpriced and when it is a good deal. One of the rules for investing in antiques is to stick to what you know. 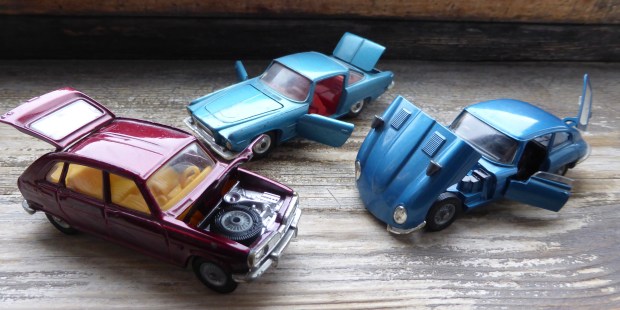 Three Corgi cars from the sixties.

Two of these Corgis were bought at Drybridge Market the Renault 16TS cost  20 lari ($11.46) and the Jaguar E Type 22 lari ($12.60). The Ghia 6.4L at the back is my most expensive model to date, it cost me £25 ($41.82) from a collectors’ shop in York. The Ghia is one of the most common Corgi models of the sixties around 1.7 million were produced, it interested me because  I like the shape also the model has many features: opening doors, boot, bonnet, tipping seats, jewelled headlights and even a dog on the parcel shelf.

Collections allow people to relive their childhood, connect themselves to a period in history or time they feel strongly about, to ease insecurity and anxiety about losing a part of themselves, and to keep the past present.

The Thrill of the Hunt

Collecting is much like a quest, a lifelong pursuit which can never be complete. Hot Wheels have cashed in on the hunting nature with special “Treasure Hunt” cars, which are supposedly harder to find than the regular Hot Wheels. I have found only one Treasure Hunt vehicle, the Ferrari 430 Scuderia, THREE TIMES!

Recently I’ve been looking out for Japanese models in the Hot Wheels line up like the Honda Civic EF, Toyota 2000GT and Mazda RX7. Rummaging through boxes of Matchbox and Hot Wheels in toyshops there is always a thrill, when I spot a model I’ve been looking for. I have a long wants’ list.

Collecting may provide psychological security by filling a part of the self one feels is missing or void of meaning. When one collects, one experiments with arranging, organizing, and presenting a part of the world which may serve to provide a safety zone, a place of refuge where fears are calmed and insecurity is managed. My father died in 2011, and part of my collecting might be a way of connecting to my childhood, when I still had my Dad.

Also I came to live in Tbilisi because in this city I had found a wonderful wife. Now I no longer needed to search for a soul mate, there was maybe  a void to search for something else.  My wife tolerates my collecting but has no real understanding of my interest in diecast cars, she has given me a couple as gifts in the past a 1:32 Lamborghini Gallardo and a 1:32 BMW X5 (the first was fine but the latter is a car I loathe).

The amount of cars I have amassed here is like a kind of ballast holding me here.  I’m not attached to every single model and have given a few away. I have two grand daughters, the elder of whom is five and  might occasionally race the cars across the floor, but has no real interest in toy cars.

Also fuelling my interest are the social media. On Facebook I am in a few groups of like-minded enthusiasts, who collect diecast cars:

I also have a blog devoted to diecast collecting aside from this main blog, as I realise my enthusiasm will only be of interest to a small niche of readers.

Diecast toys are tough they are made with an alloy called Zamak or Mazak, 96% zinc and smaller amounts of aluminium, copper and magnesium. Diecast cars to me are like miniature works of art, even if they are mass produced.

If you have any comments, I would love to hear from you.