What is my biggest fault?

My tendency to procrastinate.

When I wake up in the morning, I get up, turn the computer on and check Facebook… 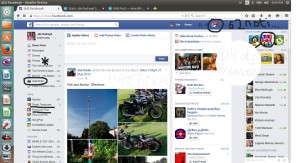 I have 764 “friends”, when I joined Facebook, I collected a lot but I have been more restrained recently. Having so many friends generates inevitably many notifications, which need checking.

Then there are the games, I have enjoyed and wasted a lot of time on many games in Facebook…farmville, Song Pop, some drawing game, Scrabble, Pirate Treasures and recently Pool Live Pro…. I will get mildly addicted for a while then move onto another game… 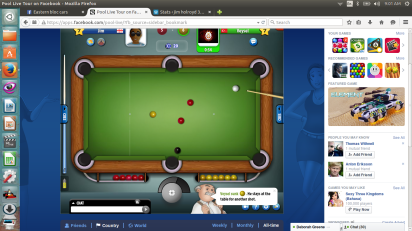 In the pool game I find myself playing with other procrastinators from Turkey, Albania or Serbia. I have learnt a lot of Turkish swearwords!

I spend a lot of time uploading photos to the numerous albums I have on Facebook. Sometimes an hour or two each day! I always carry my camera and when I upload the photos to my computer, I categorise them into which album or group I should post them.

Groups. That is another distraction. I am in several Facebook Groups related to diecast collecting, cars, art, comedy and a host of other subjects….

I hate to think how many hours a week I spend on Facebook but I think it is more than the time I spend actually working…I really should cut down. I’ll just have one more game of pool with some Turkish stranger….

One of the Facebook Groups I am more actively involved in goes by the name of “Autoshite!”

A question was asked in the group. “What’s the base definition of shite?”

One of the site administrators, Jim Welch replied, “Shite is subjective. Was it mainstream, loved, revered, dreamt about, posters on walls? Then it’s not shite. Shite is the underdog. The laughed at, the ridiculed, the beige, the entry model that has almost disappeared. We see RS2000s, but where are all the 1100L models? Sierra XR and Cosworth models by the ton. How many manual window, grey bumper, Diamond White Sapphires remain? That sort of thing. Nobody ever dreamt of a base model. That’s because they weren’t desirable. They existed only to make the range look cheap to buy. FSO, Yugo, Moskvich. Skoda RWD, certain Maestro models, etc. One offs, kit cars, home built specials… (remember the DS van?) There’s a thing. Citroen before they got sensible. Chapron convertibles not included. Modern stuff like Bristols and the Citroen C6…. certain Morgans….. but certainly not all. The list evolves around taste. Future shite isn’t decided. People saying “is my Mk1 Focus shite?” No. But who knows what the next 12 months will bring? Be vigilant people. Spottings are what we want to see. Get them in the wild. Shite in captivity is OK, but unplanned spots work best on here. Talbot Tagoras and Ranchos.. they’re ubershite.”

Living in Tbilisi. I daily see plenty of Soviet shite, also on occasions American, Japanese and even German shite but very little British shite. I’ve never seen a Talbot Tagora here nor an Austin Allegro. But I enjoy spotting the diverse range of cars that do make it to Tbilisi, frequently posting my findings in the group.

I used to pass this GAZ Chaika M14 every day for months it was parked in the same spot, I never saw it move, then one day it was gone 😦 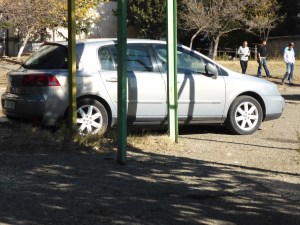 French autoshite is popular with some members of the group, I don’t see a lot here but I do pass this Renault Vel Satis regularly. I have never seen a Renault 25 in Tbilisi, if I should ever see one, I’ll take a photo, post it to the group and tag Prab, another of the site admins who is crazy about these cars.

There seems to be a small scene here revolving around Nissan Silvias (or should that be Silviae?). The streets of Tbilisi aren’t really suitable for sports cars having far too many irregularities.

One of my favourite Soviet cars for spotting is the Zaporozhets, a small rear engined car built in Ukraine. It is quite rare to see them on the road, unlike Ladas or Volgas, but there are numerous abandoned hulks slowly rusting away. In the second Disney “Cars” film a Zaporozhets is among the bad guys, the “lemons” along with a Zundapp, AMX Gremlin and AMX Pacer. 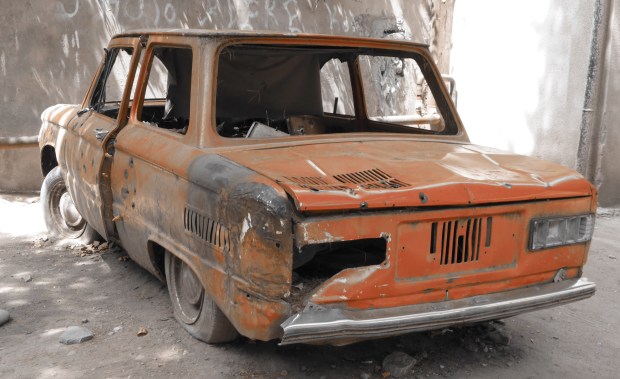 I have been spotting cars ever since I can remember, the first photos I took with my first camera were cars, so the group seems ideal for me. There are over 3000 members so it would seem a lot of people are also interested in “Autoshite” or “chod”.

There is a fine line between shite and shit and sometimes there are disputes as to which is which. Chrysler PT Cruisers and Mitsouka Viewts can be filed under “shit”.

BMW X5 is shit and not just because of the parking

There is a lot of humorous automotive banter in the group, some subjects brought up have included extortionately priced “Barn Finds” (those with a white background command even higher prices apparently), OMGHGF (Oh My God Head Gasket Failure)  a problem associated with Rovers, whether a Jaguar is just a tarted up Mondeo (X Type had many Mondeo parts), a lot of obscure facts are proferred and numerous opinions of anything automotive given.

I’ve joined too many groups, I should really go and get a life. I am in around fifty Facebook groups, some I use regularly others I wonder why I joined.

Firstly,  I have a few connected to my interest in Diecast Car Collecting:

I often share my diecast blog posts to these groups.

This is a philosophy group, I was added by a friend and erstwhile colleague, Jim Cook, even though I have never studied philosophy and don’t know my Kant from my Nietzsche . This is a very active group with over a thousand members of different political and philosophical persuasions. I now have 40 Facebook friends in this group, of which only about 4 I have ever met in real life.

Some of the posts discussed now are:

“Is medical intervention in the long term interests of a species?
Is it predictable that heavy reliance on such processes may lead to a specialised form of human being that requires a synthesised environment in order to survive?
Or has this already started to happen?” (Roland Mann)

“Should happiness be our ultimate goal?” (Telegraph-reading admin, Ronald Green)

My favourite group is possibly The Forest of Serendipity, which is for artists sharing ideas and images on a theme. Currently they are sharing artistic images of chairs.

Autoshite, I joined recently. It is a large group over 2000 members devoted to crap cars…

like this Pontiac Aztek. Beauty is in the eye of the beholder, I guess.

Chez Pantalon Rouge created by serial Facebook Group creator Andrew McFall, is a strange group, which I’ve posted about before. Members post photos taken of folk wearing red trousers…it can be quite addictive…trying to capture our quarry can be quite a task and might even bring out our inner creep.

Les Crimes Fashionnel, this is similar to Chez Pantalon Rouge,for posting images of fashion crimes…created by Sue Cowley, Andrew McFall is an admin, bringing out the Gok Wan in all of us.

Tbilisi English Book Swap, this actually is practical and relates to a group of us who meet once a month in a cafe in Tbilisi to swap English books.

The Marquee Club, Wardour Street a nostalgic group for a club I visited many times in the eighties to see bands like Fields of the Nephilim, The Wonderstuff, Twelfth Night and Magnum.

Lada UK Another group I can share my photos with, there being many more Ladas here than in the UK.

Best Medicine I am actually an administrator of this group. It is for jokes and funny things. Or “For stuck-up middle-aged men with no sense of humour…
and the women who loathe them.”

Gay Classic Car Group I’m neither gay nor do I own a classic car (or any car), but I do like the pictures they post of some lovely sixties and seventies cars.

Read All Abaht it and Weep Funny headlines and juxtapositions of images and titles in newspapers. An Andrew McFall creation.

Jim’s Cafe. Not my cafe, but Jim Cook’s for posts relating to motorcycling.

The Club “Group created to be a place where people could post links to introduce people to different music, movies, books, and all other types of ART.
(Originally for the sole purpose of supplying me with a single place to look rather than having to search the internet for new and interesting stuff. Basically I’ve become sick of how much effort needs to be put in to find AWESOME things. lol.)” I had to check the description because I so rarely use the group.

MuseSick-al Mutants Another group sharing music like The Cure and Frank Zappa.

Andrew’s Irritating Earworm Emporium. For those tunes you can’t get out of your head like “Too Shy” by Kajagoogoo. Andrew? Need you ask? Andrew McFall, again.

The Haringey Poetry Society. A group for stand up comedians. I’m not sure if I qualify, having performed only seven times.

I Saw a Classic Car Today 🙂 For posting pics of classic cars, although someone seems to be just posting images they find on the Internet, which seems to be cheating.

Kitapkokusu This is a Turkish group, I don’t know Turkish, but they do have some nice images and clips.

Eurovision Banter and Mischievous Malarkey 2013. Another Andrew McFall group. I seem to get dragged into all of them. About Eurovision Song Contest.

Slough 1980’s Nostalgia. This also makes me glad to have left Slough.

Unknown A group about art and conspiracy theories.

Students of TESOL and Applied Linguistics Relates to my job as an English teacher.

Thursday Night is Music Night – Virtual Album Listening Club. Group members choose an album to listen to together on a Thursday night. The album is usually Heavy Metal or Prog Rock.

Is There a DFS Sale on at the Moment? Yes (there always seems to be a sale at DFS).  An Andrew McFall creation.

ANi’mUS ANIMALS! cute..weird, whatever..
with some kind of photographic elegance if possible.

The following I haven’t used recently and know little about:

Ethnicity and Nationalism in the Caucasus

Items for sale in Worcester

and finally my own group:

Special Friends of Iago Created for myself and some very special friends. Iago was the name of my avatar in Second Life. This group is not very active. 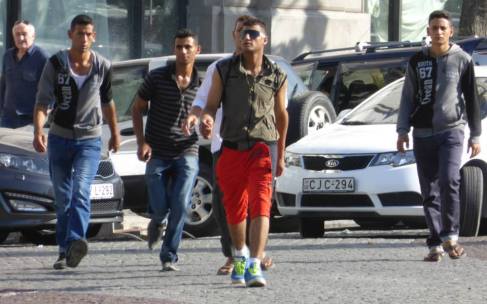 The photos can be a bit blurry, snapped quickly, as I don’t want to be caught and having to explain this strange obsession. More embarrassing is when the flash goes off, having inadvertently forgotten to turn it off. Candid street photography has a long and esteemed history (many great French photographers like Doisneau and Brassai took memorable images but being in black and white, we couldn t enjoy their shots of le pantalon rouge). Now, however, street photography is coming under scrutiny in this increasingly litigious age. In theory there should be no restrictions taking members of the public in a public place. Privacy laws, however, vary from country to country. I sometimes worry about this being an excuse for my inner creep.