I can’t get into my account on my laptop, the SMS codes sent for verification don’t reach my phone 😦

I hope I can sort this problem out.

Sometimes technology cab be so frustrating!

After nearly eight years in Georgia, to my embarrassment, I still can’t have a conversation in Georgian, but from my first days here,  I learnt the Lord’s Prayer (მამაო ჩვენო – mamao chveno) by heart. I say it every morning before breakfast, it is usually the only prayer I say in the day, unlike my devout Georgian wife, who spends at least 15 minutes often more, saying her prayers.  One of the conditions my wife had for our marriage was that I should be baptised into the Orthodox Church before the wedding. For this ceremony, I learnt mamao chveno (the Lord’s Prayer) by heart. I know the prayer in English, but when I am saying the Georgian words, it is strange, I do not actually know the meaning of the words as I say them apart from a few like “პური ჩვენი (puri chveni)” meaning “our bread”.

Here is the prayer with transliteration in the Roman alphabet beneath each line.

The last lines I have marked in light blue as these aren’t usually said.

candles in a Georgian church

This week’s challenge is entitled Solitude 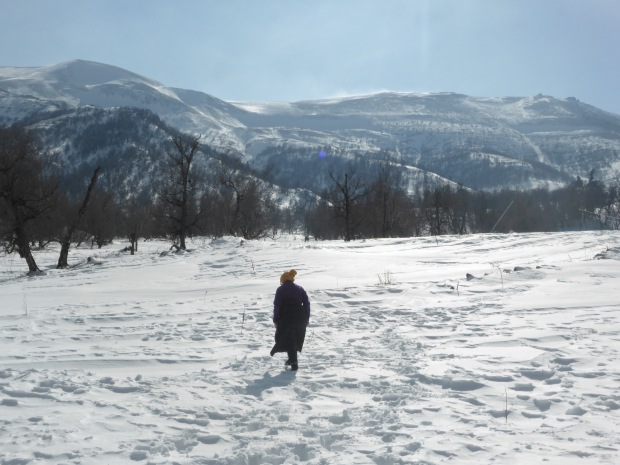 What fools call loneliness, the wise know as solitude.

“Show us something that you’ve recycled or repurposed, or an object for which you’ve discovered a clever new use.” states the challenge.

I didn’t do this, I just saw it and took the photo….

This will be a rather self-indulgent post as I look back over my year. 2016 is a year I will be glad is over. There were all  the celebrity deaths (although Bowie’s death was the only one that really shook me) , there was the shock of the Brexit vote and equally the shock of Donald Trump’s election. Of course it wasn’t all bad, Leonardo Di Caprio finally got his Oscar and a vaccine was developped for Ebola. Closer to home both my mother and mother-in-law died within 5 days of each other, my mother’s death was somewhat expected but Zoia’s death wasn’t. I was with my dying mother in England when I heard the news Zoia had died in Georgia, I returned to Georgia for the funeral, on the day of Zoia’s funeral my own mother died. Between Funerals.

I continue to teach English to private students ranging in age from 6 to over 50 years old. It is an interesting job but not something I planned to do, but I guess that is where my career path has ended.

I haven’t posted as much as I did last year. This blog has seen 75 posts published (this will be 76), last year I published 154. This is my primary blog, but I have two others; one for my hobby of diecast car collecting and the other for book reviews. This blog is primarily for photos but I also use it for my travel stories and anything else that stimulates my writing.

This blog has 298 followers (hi there!), I’d be happy to respond to any feedback or comments. My diecast blog is more of a niche interest, it has far more hits but far fewer followers. 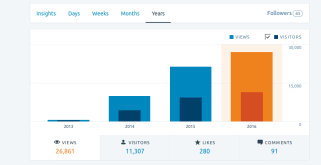 Blog views for this blog (left) and diecast blog (right).

This hasn’t been a great year for travelling but I did finally get to visit Rome, the third of the three cities I considered essential to see in my lifetime (the others being Jerusalem and Istanbul/Constantinople). I also visited the beautiful historic cities of Venice, Florence and Bologna. Rome and the Vatican 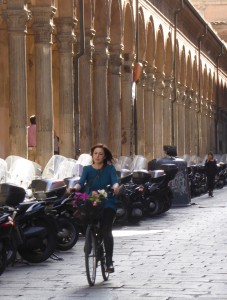 In Georgia, I visited Bakhuriani in the winter and Racha in the summer.

Visiting England in July was not for sightseeing.

I am happily married to my wonderful wife Khato, we celebrated our seventh anniversary this year.  I take my granddaughter, Ana to her teacher most days, as most of my lessons are later in the day. It is still strange being a grandfather, as I was never really a father. I met my stepdaughter, Maka (Ana’s mother) when she was 17, heavily pregnant with Ana and married… too late really to be any kind of father. I see my other grandchildren, Elene and Lazare less often than Ana. Ana is usually here in the week and her siblings stay apart from us with their mother.

I take a lot of photos each day. It is something of a passion. I post some to this blog, on Fridays there is a weekly photo challenge and I usually submit one or more photos to interpret the chosen theme.

Ana with a birthday cake

Facebook is something of an addiction, I check it first thing in the morning and spend far too much time on the site. I usually have windows open on my computer for Facebook, WordPress, the BBC (my primary source of news) and sometimes Yahoo or Goodreads or Twitter or Google. In the Summer I bought my first smart-phone, a Huawei (not sure what model), so now I can access Facebook on the move, too.

My knowledge of the Georgian Language is still pitiful, I’ve been living in Georgia over 7 years and can’t hold a simple conversation in the language. It will yet again be my New Year’s Resolution to learn the language. I have arranged with a friend for an English-Georgian exchange (next meeting 5 January). I really need to take the learning seriously, if I’d spent as much time learning Georgian as I waste on Facebook, I’d be fine now….

We can’t pick up TV stations, we let our cable subscription lapse after Zoia’s death. I have been watching and enjoying some TV series online: Big Bang Theory, Vikings and Breaking Bad.

Happy New Year to all my readers and followers, I hope 2017 brings you happiness and fulfilment.

I studied geography at university many aeons ago. It fascinates me to see where this blog is getting the most views. Unsurprisingly the top 3 are USA, Georgia (where I live) and UK (where I was born). But UAE at #7 and Russia at #8=, I find more surprising. 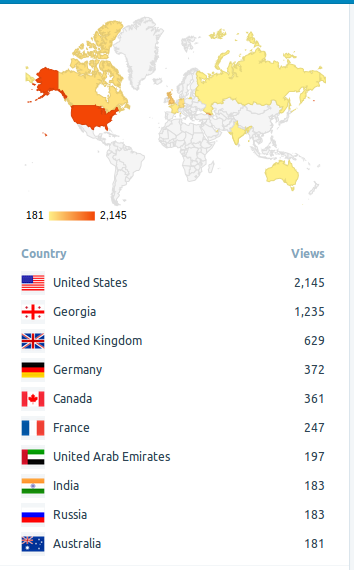 Thank you to all my viewers and followers, I hope you like what you see and look forward to any comments you might make.

“The traveller always wants home to be as it was.” (from The Passion by Jeanette Waterson).

I was born in London.

My Georgian friends are surprised I have no ancestral home, no home in England, they usually have a place “in the village” somewhere. I have no village, my wife has no village home, either, her late father sold his plot of land several years ago. We are merely renting our third flat in the capital “Tbilisi”.

I like looking for natural frames to surround the subjects.

Here the leaves in the foreground provide a natural frame for the gardener.

Heart-like frame for the sky

I saw this young woman near Rustaveli Metro in Tbilisi. I don’t know where she is from, I found the juxtaposition of the stars ‘n’ stripes top with a Muslim headscarf interesting.

One of the reasons I keep a blog is to try and make sense of my world.

It has been a difficult month. My mother hadn’t been well for sometime and I got a message from my brother, that if I wanted to see her before she passed away, I should get over to England quickly. I booked a flight and managed to get to York before she passed. My brother, his wife and one of my sisters were there too. My relationship with my siblings hasn’t been great since my dad died (2011). I didn’t get back when he was dying, I wasn’t expecting him to die so soon, and in his life he didn’t like a fuss, I thought I’d be okay seeing him later but that was a mistake, he died. I made a second mistake in not returning for his funeral.

I arrived in York on Tuesday 12 July, Danny (my brother) and Jan (his wife) were with mum in the Oaks, a nursing home in York. I was quite shocked to see mum so emaciated and uncommunicative. She had been refusing treatment, and was being kept as comfortable as possible, the nursing and caring staff there are wonderful. She had refused fluids, so we knew it would only be a matter of time until she passed, too. It is surprising how long someone can last without fluids. I contacted my wife in Georgia, each day to let her know how things were going. She hadn’t come with me because the procedures for getting a visa would have taken too long. On Friday 15 July, I called her to update her with my news and she informed me that sadly her mother had died. This was a shock. Zoia had some health issues (diabetes and high blood pressure) but had seemed fine when I left for England. The funeral was scheduled for Tuesday 19 July. Jan, through Danny, said I should go back for that. So I booked a flight and left York on the Sunday getting to Tbilisi at 4am on Tuesday morning, the day of Zoia’s funeral.

Zoia’s body was laid out in the living room, as is Georgian tradition. As the time got closer to the funeral more people came to pay their respects, an emotional time. The funeral was around 3pm in a site across town in Saburtalo. I threw a handful of earth onto her coffin. After the funeral, there was a supra (Georgian feast) and many people asked me how my mother was doing, it was difficult to explain she was dying. The same day, my mother died.

My mother’s funeral is on Friday 29 July, I have volunteered to read the words of tribute (eulogy). I have booked a flight, the journey from Tbilisi to York takes around 16 hours. I was thinking of putting a rough draft of the eulogy on here and inviting feedback, but now I think it might be imprudent. My brother was disappointed when I posted news of my mother’s death on Facebook, before he had informed the family. I have apologised. 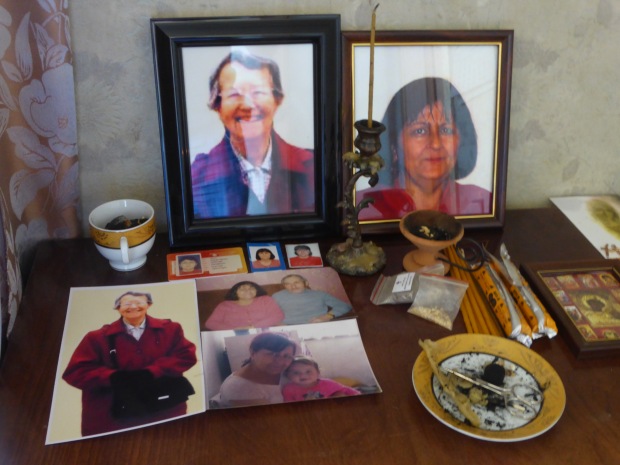 Remembering Freda (my mum) and Zoia (my mother-in-law)

So now I find myself between funerals and with a eulogy to write.