In December 1996, I was in Corsica looking after my first wife, who was ill. At this time I started a comic strip called “Betty Zapat and Yorrick“, from then until the middle of 1998, I created 127 episodes. Most of them have disappeared but I have rediscovered a few of the early episodes that I scanned and put onto a memory stick. 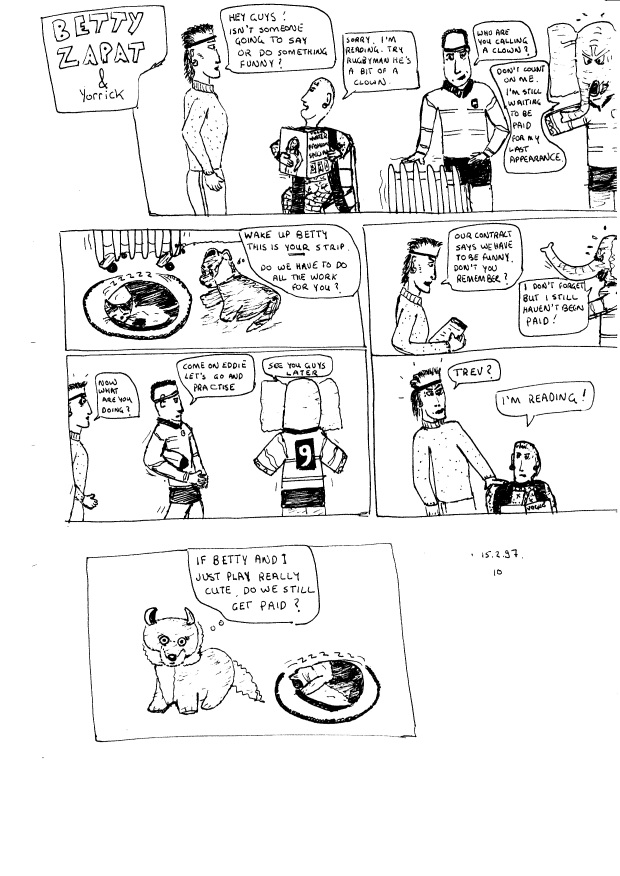 This episode features most of the major characters. It started with a cat “Betty Zapat” (which was an anglicized version of the French “Betises à Pattes” (which meant a silly thing with paws)). The cat was modelled on our own cat “Feline”, who was always doing crazy things. Her sidekick was Yorrick, modelled on a toy fox cub, named after Hamlet’s friend. There was also Rugbyman, a rugby playing macho man, Carolina, the sensible one, she wore a headband and played rugby, too. Trev was a baldheaded fashion victim, Eddie was a human sized rugby playing elephant.  Carolina had a dog called Fang, which looked vicious but was friendly.

It is giving me goosebumps seeing looking at these closely again after nearly 18 years. When I drew the following episode, back in 1997, I hadn’t been on the internet….